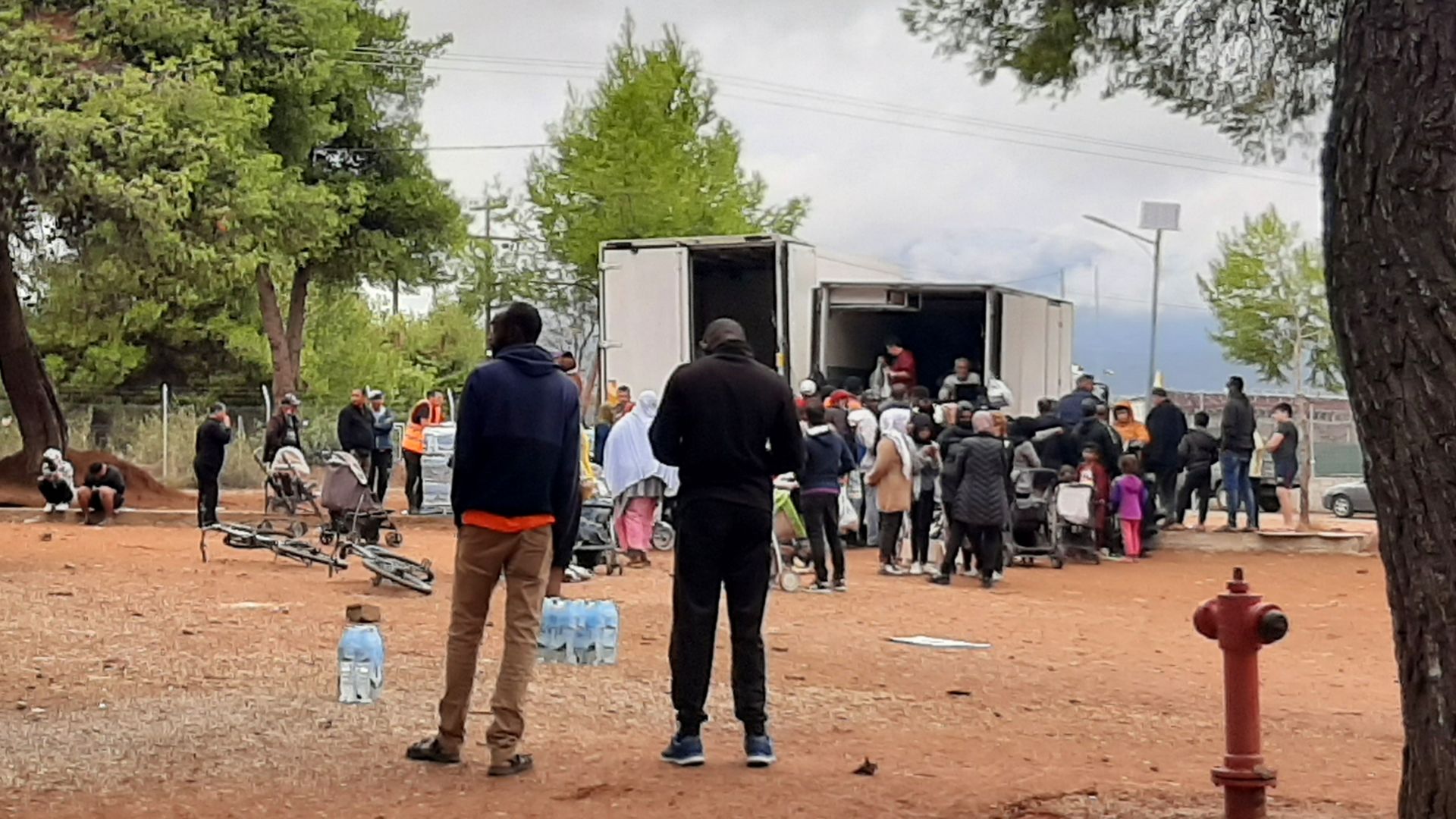 We, the undersigned humanitarian, human rights and civil society organizations and initiatives wish to express our deep collective concerns regarding the latest policy implemented by the Greek government since October 1st that has excluded thousands of persons from essential food provision. Organizations working on the ground estimate that almost 60% of the residents of the Greek refugee camps on the mainland no longer have access to either sufficient or suitable food. This is causing severe distress and putting vulnerable people at risk. One in four (25%) of the residents in refugee facilities on the Greek mainland are women (including pregnant women and single-headed families) while 40% are children[1].

Discontinuation of all material reception support, including food, for protection status holders

In March 2020, through Art. 111, L. 4674/2020, the Greek government introduced an amendment to Art.114, L.4636/2019, providing for the automatic discontinuation of all material reception conditions, including food, for beneficiaries of international and subsidiary protection as soon as their protection status is granted. According to the same amendment, beneficiaries of protection must leave government-run housing facilities in the first 30 days after the granting of protection. These stricter provisions were introduced in a context where there were already high levels of unemployment and multiple economic challenges, which the pandemic greatly exacerbated, as well as an ineffective integration policy marred by a lack of long-term planning and characterized by significant gaps.  People were already struggling before the March 2020 decision, but the deliberate exclusion of newly recognized beneficiaries of international and subsidiary protection from receiving essential supports has had devastating consequences for many thousands in need of safety and support.

Following the implementation of the provisions regarding the exit from housing facilities, thousands of recognized refugees, including mothers with young children, pregnant women, elderly people, and chronic patients, found themselves without shelter, living in public squares for prolonged periods of time. Many of the aforementioned individuals and families, having no viable alternatives, were thus compelled to return to camps in order to have access to the bare minimum, that is, water, food, shelter and primary healthcare. Others who had been granted protection status, remained in the camps beyond the new 30-day limit to try to avoid homelessness and food deprivation. The fact that thousands of beneficiaries of protection continue to stay in refugee camps, in substandard living conditions, reveals the lack of alternative viable options at their disposal. This reality is a direct result of Greek and EU failures to develop an effective and resourced integration policy. The few existing EU-funded programs to support refugees’ integration - such as ESTIA and HELIOS - have proven greatly insufficient to enable eligible protected individuals to find adequate housing and employment.

Moreover, while beneficiaries of protection are, in principle, eligible for some social benefits from the state, the reality in practice is that bureaucratic obstacles make access to these supports virtually impossible. For instance, individuals are required to have a valid residence permit to receive the Guaranteed Minimum Income (EEE). However, extreme delays – often exceeding six months - in issuing the residence permits prevent recognized refugees from accessing this essential benefit. One year ago, the government announced measures to ensure asylum seekers would be provided with a bank account, a taxpayer ID, and a temporary social security number; yet, in practice, many asylum seekers have been unable to receive these documents, necessary, among others, for renting a house and for employment, due to delays and COVID-19 restrictions[2]. Moreover, some registered asylum seekers are also facing food insecurity. Specifically, the beneficiaries of the ESTIA program. Due to the handover of the cash assistance program from UNHCR to the Greek government, asylum seekers have not received their cash support for the month of October and not even catering has been provided. Thus, the ESTIA beneficiaries have been left with no government support and turn to the local social services and charities for food provision.

Despite the high unemployment, the lack of integration policy the risks of homelessness, and the lack of access to essential documentation to obtain work, healthcare, or food, since October 1, 2021, the Greek government further restricted available supports. On top of calling for an exit from state-run accommodation, the latest policy enforced the provisions regarding discontinuation of all material reception conditions to protection status holders, including food.

Another category of persons excluded from food provision since 1 October, includes asylum seekers with second instance negative decisions on admissibility. Amongst these are nationals from five countries (Syria, Afghanistan, Somalia, Pakistan, and Bangladesh), to whom the concept of the safe-third country has been applied. These asylum seekers find themselves in a legal limbo, without access to legal status, rights and basic services, including food provision.

However, others who have not been granted protection are similarly excluded from food provision. This includes asylum seekers whose asylum applications were assessed on merit but later rejected and asylum seekers whose applications have not yet been registered due to chronic delays at the Asylum Offices of the Greek mainland. It has also been reported that food is not even provided in some places to people placed in quarantine for COVID-19.

All of these groups are vulnerable, but the realities facing those from the five countries impacted by the decision to designate Turkey as a safe third country are of particular concern from a protection perspective. When interviewed by the Greek Asylum Service and the European Asylum Support Office (EASO) asylum seekers from these five countries are not given a full protection interview, but instead are only asked questions to determine whether Turkey could be considered a safe country for them to seek asylum. If they receive a second instance of a negative decision on admissibility i.e., it is deemed that Turkey is a safe country for them, they then find themselves in a legal limbo: they cannot be readmitted to Turkey, since Turkey has not accepted any readmissions since March 2020, and they cannot return to their countries of origin due to fear of persecution.

At the same time, Greece refuses to examine their applications on their merits. As a result, these asylum seekers are deprived of legal status and reception conditions, contrary to Art. 86(5) Law 4363/2019 and Art. 38(4) of the European Directive 2013/32/EU, which provides that if the third country refuses to take a person back, then the State must examine the asylum application as to its substance. In its written answer to a parliamentary question on June 1, 2021, the Commission pointed out the applicability of Article 38(4) to the context under discussion[3]. However, contrary to this legal obligation, Greece continuesto force thousands of asylum seekers into legal limbo. These asylum seekers are then excluded from reception conditions, including the provision of food since October 1, 2021.

No one, irrespective of their legal status, should be deprived of food. Food insecurity, let alone food deprivation, is unacceptable, but particularly so as a policy of any European state.

In order to ensure access to basic dignity and rights, including the right to food, and to prevent further suffering we call on the Greek government and European Commission to:

Ensure that, in accordance with the Art. 38(4) of the European Directive 2013/32/EU and inview of the discontinuation of readmissions to Turkey since March 2020, those asylum seekers for whom the safe thirdcountry concept has been applied, have their applications examined on the substance and merit and are provided with respective legal status and adequate reception conditions, including food.