Today, 30 October 2020, a massive and unannounced Police operation took place to evict Pikpa camp.  Riot police and police forces, accompanied by the Public Prosecutor invaded and encircled Pikpa camp at 6:30am in order to move the residents to the “old” Kara Tepe camp. At the same time, yesterday, the first case of COVID-19 was found in the old Kara Tepe camp, exposing Pikpa’s residents to unnecessary and avoidable risk.

Residents were woken up in their houses by police. No official written order was presented at any point, despite lawyers’ repeated requests for individualised decisions for transfer to a new place, in respect of national, European and international law. The public prosecutor, who was on site during the eviction, repeated she was only present to monitor the situation.

Today, the European Court of Human Rights was about to judge on the applications for interim measures of two vulnerable residents who had asked for the suspension of their removal; and more cases are pending.

The few team members of Lesvos Solidarity who were present in the camp were not allowed to move around to observe the situation  or support the residents, and were kept under supervision of police. Even when the vulnerabilities of the residents were flagged again, nobody else was allowed inPolice forces surrounded the camp denying access to the residents’ lawyers, psychosocial and medical workers, volunteers, Lesvos Solidarity staff members. Press was also denied access to the premises.

The extensive police operation put huge, and unnecessary stress and anxiety on residents. Among 74 residents with vulnerabilities, including people with mental health issues who are extremely sensitive to stress under these situations, 32 are children.

The team members  inside the camp were trying to calm distressed people and anxious children who approached them, as police went from house to house. The residents, including many children, had to face the cruelty of this eviction; an eviction from a safe place that was their home exposing them  to a potential retraumatization by forcing them  to leave their home surrounded by armed police. One resident became unwell due to stress and was transferred to hospital by ambulance to receive treatment.

Lesvos Solidarity has been asking since the first announcement of Pikpa’s closure for the transfer of vulnerable refugees in safe and humane conditions, for people to be treated like people, with respect, and have their rights respected. Instead, people again have been met with brutality. People are moved around like objects, without any justification. As has been publicly announced, Kara Tepe is supposed to close by the end of December.

It is unacceptable and absurd that a place like Pikpa is forced to close, while Greek and European governments supporting and promoting the new inhumane, degrading camp Moria 2.0.

In the meantime the government keeps presenting Pikpa as an illegal occupation, while the Ministry of Labor, who owns the place, by its decision (see below) since 2015 has provided the space and licensed the use of it as an accommodation structure for vulnerable refugees. The same ministry, along with the Ministry of Migration and UNHCR were referring people to PIKPA for accommodation until now.

We maintain that the Pikpa community is an example and that the overcrowded, inhumane camps across the Aegean, like Moria 2.0, are a disgrace for Europe.

“We remain strong in our convictions and we will only get stronger as the struggle continues for a Europe where everybody can be welcomed and live in safety and dignity, with equal chances for all. “ concludes Efi Latsoudi. 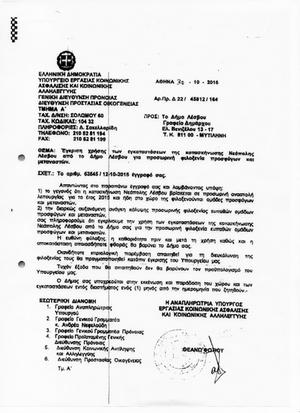